I began building some of the bulk pieces last week. So far I have used a dremel / dremel drill press, coping saw, and drill. I already had the dremel. All other tools cost me a combined $80 dollars. The parts themselves are made up of poplar, wood glue, and aluminum square. I got the idea for building pieces this way from Bruce Wattendorf. He has a lot of images up on here. These images were a lot of help when deciding how to create the replicated parts myself. 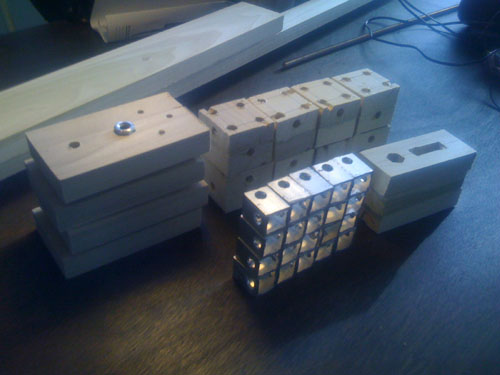 A quick calculation shows that I have made about 40% of the replicated parts I need at this point. I would say this is good progress for a few weeks worth of spare time work.
Posted by gavilan at 5:08 PM No comments:

RepStrap: I am not spending that...

I have several build options for a RepStrap at this point.

The first option that I considered is the most feasible option, which is to build a McWire. It is cheap and easy to construct. It is sturdy enough to run a mill. All around it is a solid solution for a RepStrap. However, because of the thread rod everywhere, it is slow. Also, it isn't very photogenic, is it? Also, it will always be a RepStrap. (A RepStrap is named such since it cannot reproduce itself. However, it can produce something that can reproduce itself.)

The second option is to follow Forrest Higgs' route and build a traditional CNC machine. I could theoretically build one for cheap. However, Forrest has yet to extrude much with it. At a later date I may have given this a try.

All other options are centered on the Darwin design. I like the Darwin because it is... pretty. It may sound shallow but pretty can very easily translate to good mechanical engineering in my opinion. Also, it is a proven design. And... it has the potential to become a RepRap once you start printing parts to replace the parts you purchase or make.

OK, so I've settled on the Darwin design. Now all that is left is to decide whether to purchase or build the replicated parts. If you refer to the image from the previous post the white and green parts are what I am talking about here. As far as purchasing these parts it looks like the only viable option today is to have them made at Ponoko. I am not willing to spend +$400 dollars on parts that I plan on replacing as soon as I can print them.

It looks like I am stuck with making these parts by hand. But how?
Posted by gavilan at 5:07 PM No comments:

While attempting to build a web cam mount in one of my other blogs I realized that I did not have the tools or the resources for a legitimate solution. Looking around the Internet a bit revealed no company willing to prototype small quantities of anything at a small price. This is when I started wondering whether creating my own rapid prototyping device was within my reach. A quick Google search shockingly confirmed the positive! This brings us to the RepRap or the Replicating Rapid Prototype Machine conceived by Adrian Bowyer. Below is a picture of the Darwin, first iteration, model. 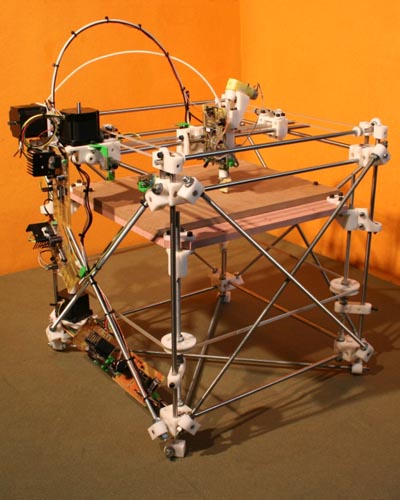 Image can be found at RepRap.org.

Since their website is top notch I will not attempt to rehash the purpose of the project. Let us just say that it has a print head that can extrude plastic while moving in three dimensions. This allows it to build up layers of plastic into a 3D object that is accurate up to 0.1 mm (in theory).

I will begin building after a bit more research. Oh, here is a video of Adrian Bowyer talking to the economic and social impacts of a Replicating Rapid Prototyper: RepRap Pop!Cast
Posted by gavilan at 8:27 PM No comments:

AllSeeing: stuck with an empty wallet...

Did you know... that hot glue does not make a strong enough connection between a miniature web cam and a servo drive gear? I was foolish enough to try this. I guess I forgot that proof of concepts should stay in their own directory. In order to get this rig driving a web cam around it is time for mechanical engineering to step in. Only, proper mechanical solutions to servos driving a web cam would require gear trains, bearnings, and some type of housing. Have you ever priced gears?

So far this project required the following funds:


Put gears, bearings, and housing on that list and you are looking at a shoddy solution running +$60 more dollars. I am not willing to spend this on components that cannot be reused and on a project that cannot occupy my time for more than a month.

Here is where things get interesting. I sat on this dilemma for a few days and decided to start searching Google for a rapid prototyped solution. That is, I searched for companies willing to prototype custom parts for cheap. I could not believe what I found. Hence forth I am abandoning this project in order to make my own rapid prototype machine for under $500, unlocking SO MANY possibilities! Once this prototype machine is complete I will eventually revisit this... I am sure.
Posted by gavilan at 4:22 PM No comments: