This episode reviews some of my favorite viewer contributed solutions to my wire flexibility problem. Thanks to all who contributed their ideas!
Posted by gavilan at 2:09 PM No comments:

The Soul of a Maker

In the last few months I have had a lot of time for introspection. It turns out I'm not just a guy who likes working with computers and dabbling in robotics in his spare time. I'm a guy who just likes making things. All things! Robotics is just a category of the things that I like to make.

I've always been this way, although I didn't realize it until recently. I don't want to make a wordy post about all the things that I've made in the past or present, but I do want to say that ever since I realized that I just like making things, and started embracing this part of myself, I've been happier.

Here is one example of how I am now happier. Before realizing I just like making things I would have gone into this weekend pressuring myself into working on my dogbot and making a video. I would have measured my enjoyment by my progress, but that is no way to live! Instead, I went into the weekend wanting to work on my dogbot, but getting side tracked. I was researching braids so that I could braid a collection of wires running to the dogbot foot when a few ideas and desires collided.

My belts (the ones that hold up my pants) are getting old and falling apart. I don't want to buy anymore leather belts because... [whispers] I'm a vegetarian... and I don't want to spend the money for an organic "trendy" belt. I have 1000' of parachute cord and worn out belts with working buckles. I like making things.

Fast forward 2 hours and I have a new belt! 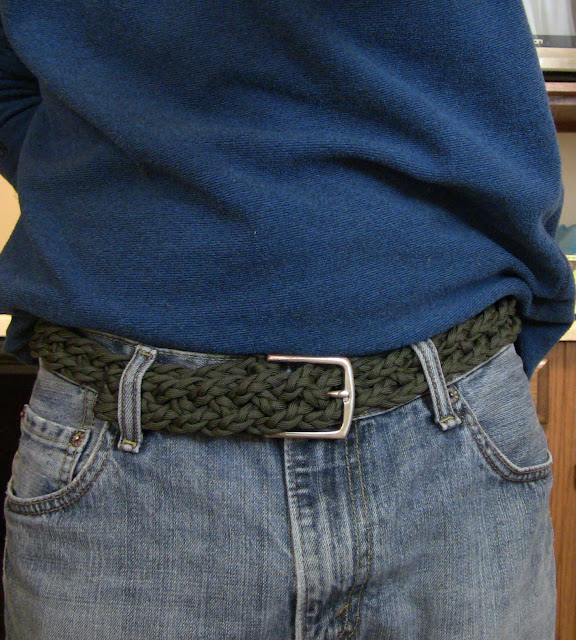 Making this parachute cord belt was not what I planned on doing this weekend, but the act of making it has made me very, very happy. To all you makers out there, be encouraged to embrace the true you. It's OK to jump from one project to another so long as you keep your work-space clean, and finish a few projects every once in a while. Adam savage has helped me realize that "achieving the end of the exercise was never the point of the exercise to begin with, was it?"
Posted by gavilan at 11:00 AM 3 comments:

Email ThisBlogThis!Share to TwitterShare to FacebookShare to Pinterest
Labels: misc

I noticed a trend in the comments from the last video. I got a lot of comments about using a smaller gauge wire. In this episode I test the flexibility of 30 gauge, 26 gauge, and 26 gauge shielded wire. Thanks for all the feedback from the last episode! In the next episode I'll dive deeper into that feedback.

tv: A Problem of Flexibility

I need your help. I'm stuck! I need a way to receive information from the DogBot foot without restricting it's movement. Any ideas? Please leave a comment if you have any ideas!

Here are the background videos leading up to this one:
http://www.youtube.com/playlist?list=PL3snrjNPXd06-ehRLuxy9W5Q222wLs0ed
Posted by gavilan at 7:40 PM 3 comments: